The first row of the attached file is not interpreted as column headings.
Other, apparently similar, files are loaded fine. 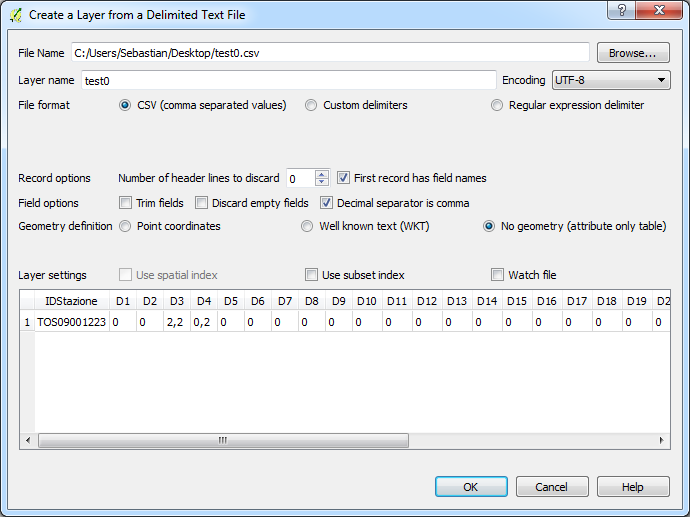 Loading through the text delimited plugin is OK, but simply dragging it into the cnavas shows the issue reported. Similar files load fine.

OK, now I could reproduce in master. Turns out this is a GDAL/OGR issue.

Note that files are loaded through GDAL/OGR when

This is different from opening a file using the Create a Layer from a Delimited Text File dialog where the provider will be Delimited text data provider.

The GDAL/OGR .csv-driver uses some logic to detect whether the first line is a header or not. In your case it finds some all numeric values in the first row (D1 to D31, D is considered a hex-digit) and treats it as a data record instead of as a header.

The easiest solution would be to put the column names within double quotes, at least the offending ones.
Bad:


Can you confirm the similar files that load fine have different, non-numeric column names?

The attached test1 loads fine.
Thanks for your feedback.
Perhaps worth opening a ticket on GDAL.

The attached test1 loads fine.
Thanks for your feedback.
Perhaps worth opening a ticket on GDAL.

You might consider opening a feature request to prefer the QGIS-providers over the OGR-provider for files that are supported by both, like CSVs.

Updated by Even Rouault almost 6 years ago

Fixed in GDAL per https://trac.osgeo.org/gdal/ticket/6305. I'd note that the OGR CSV driver has gained editing capabilities in GDAL 2.1dev (specificaly to be used through QGIS), whereas AFAICS the QGIS CSV provider is read-only. It would be a shame that using the OGR CSV driver is no longer possible.