Added by Mark Johnson about 5 years ago. Updated over 3 years ago.

Otherwise everything seems to work as expected.

For the 'designing' if the Symbol to be shown this should be considered important.

I assume that something similar must be done as in QgsRenderContext::convertToMapUnits
- where in the case statement RenderMetersInMapUnits must be added before QgsUnitTypes::RenderMapUnits with a FALLTHROUGH;

Updated by Mark Johnson about 5 years ago

This problem seems to be caused by a (possibly) logical error in QgsSymbol::bigSymbolPreviewImage 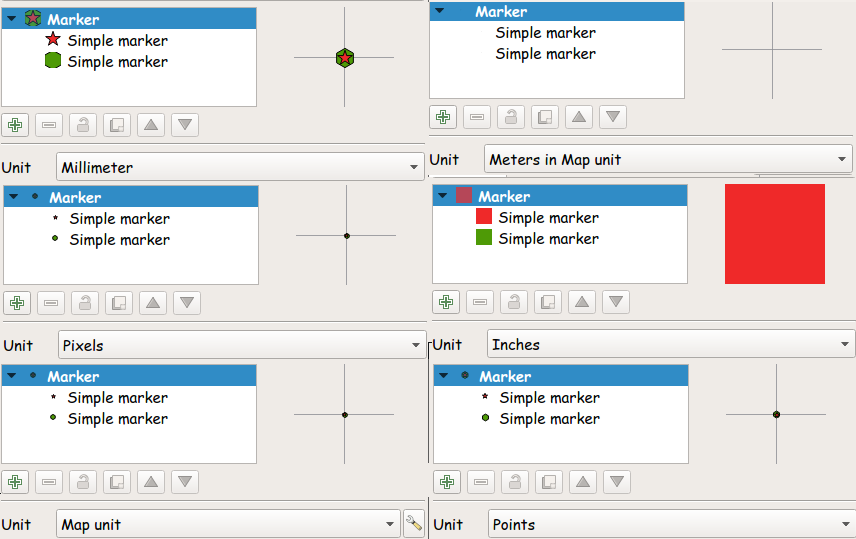 The QgsDistanceArea being used is not based on the Layer being used.

Thus when this runs, MapUnits are assumed to be in Degrees, RenderMetersInMapUnits (a value given in Meters) is transformed into degrees. So for the given 5.1 Meters: 0.00000458141 is bing used - which cannot be seen.

This seems to also to effect Icons being shown for the 'Simple marker' and in the Layer Panel.

I was hoping to do the same for QgsSymbol::drawPreviewIcon, but that did not work.
- so this problem is still open.

A pull request is being made for the first solution with a reference to this issue.

Updated by Giovanni Manghi over 3 years ago