This page compares several methods to use OpenStreetMap with QGIS. It gives detailed procedure to have a hiqh quality, customisable rendering along with routing capability.

A video on how to use osm2postgresql and QGIS together is available here:
http://www.youtube.com/watch?v=NBBYtH2svw0

What is achieved with this tutorial¶

[[File_Lago_di_varese.png|300px|thumb|right|Example achieved with this tutorial, same area as here. Click on image for higher resolution.]]

If your osm file is small or if you have tens of GB of RAM (!), see this tutorial (read my comment on the same page). Otherwise please wait until I write here the solution I'm using...

New! (March 2011).
This is an easier and more powerful solution largely built on considerations and codes from this page.

This is the easiest but there are several problems:

Only the first of those 3 tools was tested here.

Currently, some simple closed ways that should be imported as polygons are imported as linestrings, whereas the geometry is missing for complex polygons. In addition, for each feature only two tags (type and name) are extracted with the spatialite_osm_map tool.

It is easy to download shapefiles for a single country on cloudmade or geofabrik. They can be used directly in QGIS. An example of a web rendering made with such shapefiles is described here and can be tested here.

There are two main problems: 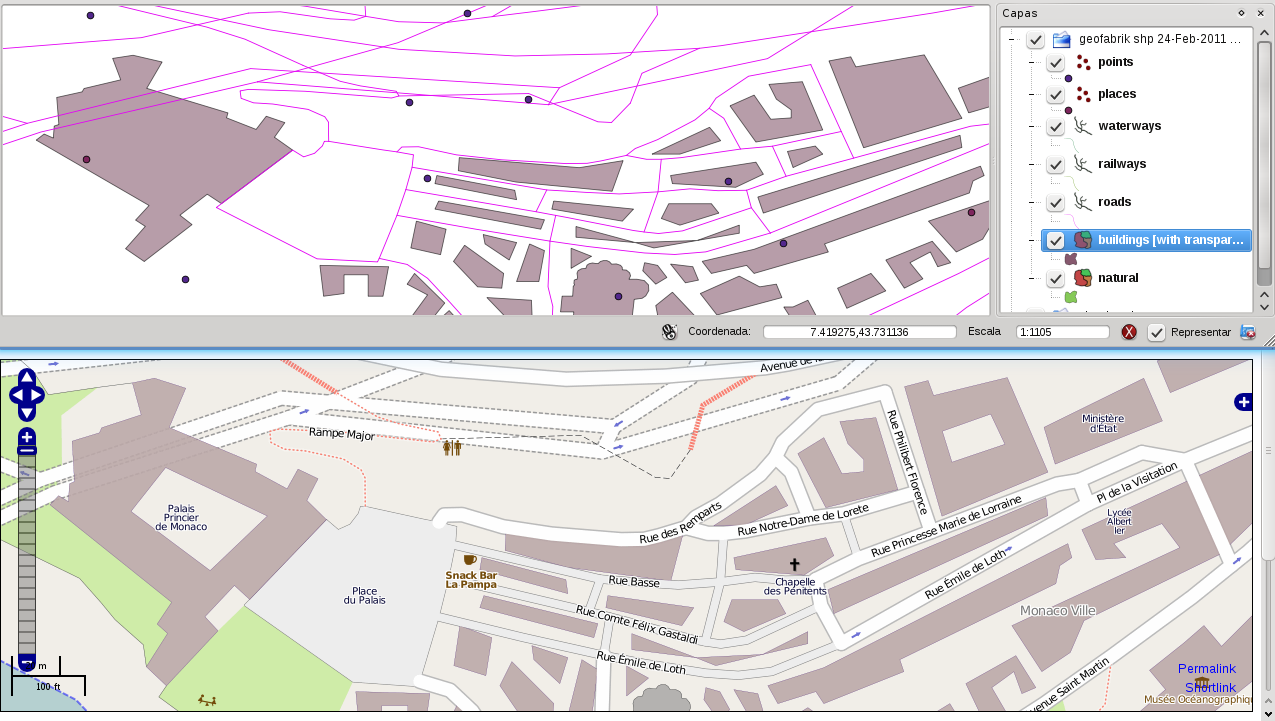 Solving the polygon problem requires carefull geometrical analysis (made with sql script on this page).

If you insist on using those shapefiles, do not forget to create a spatial index in QGIS (layer properties>General). Still, there is probably a limit in data size (would not be efficient with planet.osm converted as planet.shp!).

(I hereby release under the GNU/GPL livense v2 or above [at your choice] all the scripts in this postgis section, including the sql scripts to create polygons. MayeulKauffmann 17:28, 24 February 2011 (UTC)).

But is is faster to issue a multithreaded command instead: (see OSM wiki):

Not all of the above is necessary (e.g. hstore already in contrib ubuntu package).

You can try the latest postgres 9.0 instead. Some useful features: much improved hstore support (compare 8.4 with 9.0), DROP COLUMN IF EXISTS facilitates testing and RE-testing,...

The interaction of the rights management between Linux and Postgre are a bit confusing. Also some operations can only be done as postgres (even if you give many privileges to your user), while doing everything as postgres will make it quite hard to give ownership of everything back to your user. I had to figure it out in several trials, the procedure below is not guaranteed to work on every configuration. It gives access for the user 'mk' (CHANGE THIS FOR YOUR NEEDS!). On linux shell:

You might need to define another temporary folder (on Linux, /temp is used so it's cleaned at each reboot...):

You should probably test with a smaller area first (see OSM wiki). You can extract one with:

You could directly import a .osm file with this multithreaded osmosis command:

Still, do it in two steps unless you have very high performance machine (including very fast disks) or unless you import a small file.

On linux shell (your user, not postgres):

(Quite tricky: The data structure is still largely debated in OSM wiki! Still good enough results are obtained with script below, which is still under development).

Reproject the data before using them¶

Reproject while doing the data import, not on the fly (otherwiseÂ : performance killer) see
http://www.qgis.org/wiki/Rendering_Performance

(Osmosis nor osm2pgsql cannot reproject. Yet to be tested: http://postgis.refractions.net/documentation/manual-1.5/ST_Transform.html)

Currently, parameters in symbology can only be mm (relates to size on device, i.e. proportional to number of pixels) or map unit. Qml styles mentioned below were designed with a metric map unit and rely on it (for instance, a given type of road can be change displayed with a 10-meter width). Using realistic width for linear features gives nice results while zooming with small increments on scales between 1:100,000 and 1:500. It is impossible to achieve with pixel-based width. (You should modify the styles if you use lat-long unprojected data: a 10-meter wide way would be represented as a 10 degrees wide way!!).

Any world, metric projected system would do it. Suggestion is to reproject to Google mercator (compatible with openlayers plugin). (EPSG:....)

If you have several hard disks, you can put some postgresql tables on one disk and other tables on another one (the disk space you use is called a 'TABLESPACE').
This is what I did (my home is /home; I have another disk mounted at /hometb):

This is not longer required if you use the latest 1.7.0 QGIS version. Otherwise:

Most of the icons used were derived from files modified from the original ones available here. Some were created from scratch by MayeulKauffmann, some were fixed to avoid rendering bugs, all were (re)generated with a custom script (adapted from the one available here).

This is a copy of the folder I use for rendering.
The osm_icons4qgis_v1.zip file contains original QGIS icons plus a set of coloured icons based on/inspired by SJJB icons:

All the original (as of 2010-09-12, hence newer SJJB icons are missing), modified and new gray scale icons (made by, based on or inspired by SJJB management), along with the scripts I modified and the resulting icons are available here:
http://www.mediafire.com/?hlcck86em3bxqje

Thanks for SJJB who provided most of the icons and the original script!
See http://www.sjjb.co.uk/mapicons/introduction

All the icons that either SJJB or myself created are copyright free (CC-0). I do not know the status of the others (mostly, the others are preinstalled with qgis).

This is a set of GNU/Linux scripts that I adapted from SJJB scripts to generate the coloured svg icons (based on SJJB-compatible icons). You need 3 files. Put them in a folder in which there is a ./svg/ subfolder with the SJJB icons and similar icons. Then execute the first script only:

If you want to add new icons, take a simple icon that is close enough to the one you want to do, open it with inkscape and study it well; try to do the same: do not create new colous in the grayscale icon otherwise the above scripts will not work properly. Creating new icons with inkscape is fun, pleasant and rewarding.

This is optional. You can create level curves from SRTM or ASTER. There are many ways to do this.
For large files, it is probably best to put the data in postgis (I'm doing this after using gdal_contour to create shapefiles for various intervals).

These qml styles can work but you need to be very careful about how to set up the project and layers. On OSX (QGIS 1.7.2) it required:

This works with both osm2postgresql imported data in a PostGIS database as well as the OSM plugin for QGIS (for the latter you will need to select on-the-fly transformations and a UTM code for the project).

The following two mentions should remain when sharing or transforming one of these maps: Map data (c) OpenStreetMap contributors, CC-BY-SA (all maps). This map (c) Mayeul KAUFFMANN, CC-BY-SA, made with QGIS and osm2postgresql (for the map I created).