There are some situations where the user would want to access data from one of different sources, indirectly, through some kind of transformations. This could be selecting a subset of attributes, renaming some of them, accessing subsets of a layer or compute dynamic attributes and geometries based on one or more underlying tables.
This concept can already be found in the context of RDBMS, where it is called a "view".

The following proposition will discuss how such a feature could be implemented in QGIS.

There is already something very close that can be found in the GDAL library: VRT. A VRT is a virtual dataset that can be composed of other datasets. Here is an example of such a file, where two X and Y woordinates from a primary dataset named "ROUTE_XY" are used to build a point layer :

The idea here is that if data of the primary dataset changes, the VRT layer is dynamically updated.

The GDAL's VRT driver is very powerful, but is limited to data sources handled by GDAL.

This is why we propose to have a similar concept for QGIS, where every data sources known by QGIS can be used.

The proposed design is based on these different use cases for vector layers. Feel free to add/discuss your own here.

Regarding the "advanced" mode, SQLITE has a very useful feature of virtual tables that could be used here. The idea would be to build a SQLITE database (possibly in memory) and give access to QGIS layers via a CREATE VIRTUAL TABLE statement. This way, we could benefit from the advanced SQL query language implemented in SQLITE.
Moreover, the built database should be a Spatialite one, in order to be able to access geometries and use spatial operators.
This leads us to propose a QGIS virtual table provider for Spatialite.

The "basic" mode would then be used through a special UI that ease creation of a Spatialite base with a virtual table.

Here are some questions/issues/remarks raised after a first very simple Python prototype of virtual layers by means of a QGIS plugin (https://github.com/Oslandia/qgis_vtable):

The creation of a virtual layer would be available through a new option for existing Spatialite databases (in QSpatialite probably).

Some shortcuts would be provided to create a virtual table, for instance, by right-cliking on a vector layer, it would be proposed to create a new virtual layer based on the selected layer. This could also work for multiple layers (in case of an "advanced" use for SQL joins)

Possible dialog for the creation of a virtual layer: 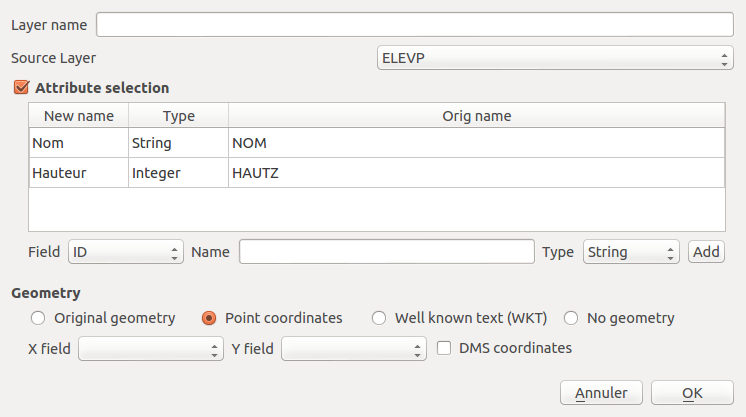 These shortcuts would automatically create a spatialite databse with virtual tables and views according to parameters set by the user.
For the previous example, it would be equivalent to the creation of a Spatialite database with the following statements :

For more advanced uses, a shortcut in QSpatialite would be added to ease the creation of a virtual table from a QGIS layer.
Example of a spatial join with a virtual layer that embeds two other layers: